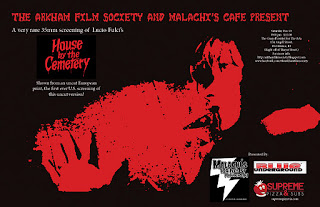 The House By The Cemetery
Saturday December 10th 8:00pm $10.00 Per Person
Come on out to see a true classic of Italian horror the way it was meant to be seen, UNCUT and on 35mm!

At The Granoff Center For The Arts, 154 Angell Street, Providence, RI  (Right off of Thayer Street.)
House By The Cemetery is a 1981 classic of Italian Horror which concerns the family of a New York professor who moves his family to a Boston area house previously owned by a colleague only to find out that the house’s basement holds a horrifying secret. House By The Cemetery was heavily cut to achieve an R rating for its initial theatrical release in the U.S., but with the help of Blue Underground (who recently released the film on Blu Ray and DVD) and Vagrancy Films based out of London, Ontario Canada we are able to bring to Rhode Island a completely uncut European print of the film which has been flown in from Denmark. Not only is this a rare film print, this is the first time this full print of the film has ever been screened in the U.S., so in an ever increasingly digital era you Rhode Island film fans can see a truly original film in its intended theatrical format. Another interesting point is that although this film was an Italian production, all of the exteriors were filmed at an actual house in Scituate Ma. 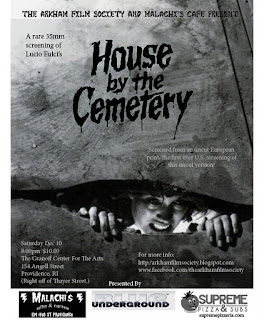 For more info on the Arkham Film Society please check out:

www.facebook.com/thearkhamfilmsociety
Special thanks go to our sponsors:

Malachi's Cafe
www.facebook.com/malachisri
Supreme Pizza
supremepizzaria.com
and extra thanks to those that helped organize this event:
Blue Underground
www.blue-underground.com
Vagrancy Films
www.facebook.com/vagrancyfilms
Posted by Arkham Film Society at 12:04 AM No comments:

NIGHT OF THE HUNTER in 35MM!

Our November screening is upon us and it is with great pride and with the assistance of Malachi's Cafe that we bring you Robert Mitchum in Charles Laughton's
NIGHT OF THE HUNTER
in 35mm!
So come on out on Saturday November 19 at the
Granoff Center For The Arts
154 Angell Street, Providence, RI
(Right off of Thayer Street.)
Show starts at 8:00pm and admission is $8.00 per person. 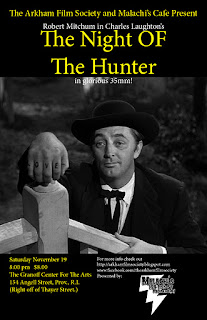 Posted by Arkham Film Society at 1:52 AM No comments: