The Arkham August meeting is upon us. 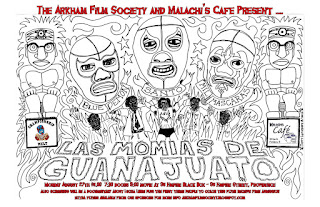 This months meeting of The Arkham Film Society is our first ever tribute to Lucha Libre films on Monday August 27th. We will be screening Las Momias De Guanajuato (The Mummies of Guanajuato – 1972), a classic Mexican wrestling  / horror themed film in which wrestling stars Santo, The Blue Demon, and Mil Mascaras have to join forces to save a town from rampaging mummies. As an added bonus this film will be followed by an hour long documentary about Lucha Libre and its impact on Mexican society. It goes without saying that costumes are encouraged.

The screening is Monday August 27th, 7:30 pm doors with an 8:00pm showtime and a $5.00 admission. Screening will be held at the 95 Empire Black Box, 95 Empire Street, Providence. Plus the first three people who color our flyer can exchange their colored flyer for free admmission, extra flyers can be obtained from our sponsors!

The Arkham Film Society would like to thank our sponsors Malachi’s Café (134 Ives Street, Providence, www.facebook/malachisri ) and Championship Melt (www.championshipmelt.com). Championship Melt will also be at the event selling grilled cheese for people of all dietary persuasions. For more info check out www.facebook.com/arkhamscreenings. 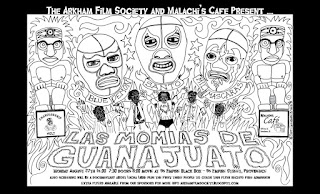 Posted by Arkham Film Society at 2:13 AM No comments: