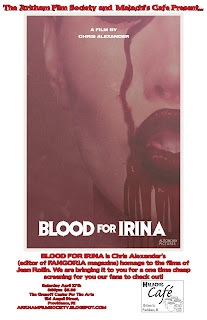 Our April onslaught rolls on.... 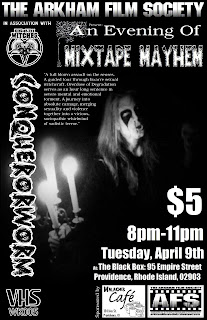 Mixtape Mayhem with King of the Witches!

For those of you that enjoyed the horror/gore/hardcore/metal/sexploitation insanity exemplified by our Whore Church screening, we bring you, by popular demand, another night of Mixtape Mayhem with programming provided by King of the Witches.Since the programming that we are showing has only previously been released on EXTREMELY limited VHS tapes that sell out through invite-only pre-order in minutes, this may be your only chance to experience what has been described as “A full blown assault on the senses. A guided tour through bizarre sexual witchcraft. “ and “Overdose of Degradation serves as an hour long sentence in severe mental and emotional torment. A journey into absolute carnage, merging sexuality and violence together into a vicious, sociopathic whirlwind of sadistic terror.”Please note that this event, as most of our screenings, is 18+ Adults Only!Check out the trailer here: http://youtu.be/T296asxmygM

And get more info about King of the Witches and buy stuff here:http://kingofthewitches.storenvy.com/

And “Like” the Facebook page here: www.facebook.com/KingOfTheWitchesWe at the Arkham Film Society hope to use these monthly meetings to expose our audience to a mix of obscure forgotten films along with some new independent features.Please let us know what you think of our programming by leaving suggestions and comments at our Facebook group,www.facebook.com/groups/arkhamscreenings or at our blogwww.arkhamfilmsociety.blogspot.com and inviting your friends and acquaintances to do the same.And please stop by our Etsy and buy some stuff or at least help us promote the page to enable us to continue doing what we do:http://www.etsy.com/people/arkhamscreenings
Posted by Arkham Film Society at 4:11 PM No comments: